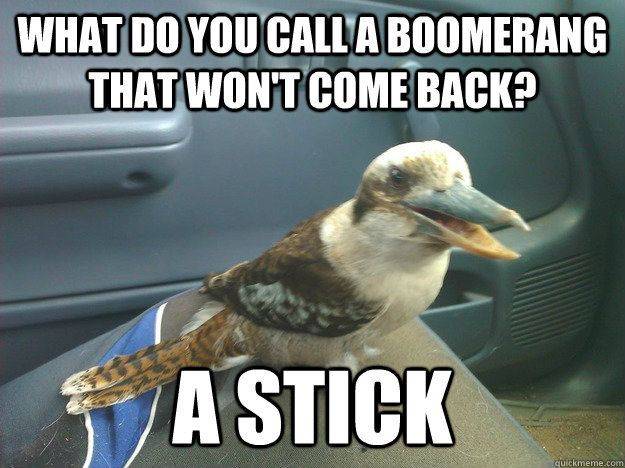 There’s a bunch of Australian jokes that have been told more times than a kiwi’s shagged a sheep, like, “Australians don't have sex, Australians mate,” and “What is the difference between yoghurt and Australia? Yoghurt has some culture.”

Read them and discover:

> Why are murders so hard to solve in Tasmania?

> How many aussies does it take to screw in a light bulb?

> What are the only two seasons that a bogan can name?

A British man is visiting Australia. The customs agent asks him, “Do you have a criminal record?” The British man replies, “I didn’t think you needed one to get into Australia anymore.”


Why are murders in Tasmania so hard to solve?
Because there are no dental records and all the DNA matches.


How many Aussies does it take to screw in a lightbulb?
Three. One to hold the bulb and two to turn the ladder.


What do you call an Aussie in the finals of the World Cup?
A referee.


What do you call a farting Aussie?
Ned Smelly.


Q: What’s the difference between Cinderella and the Melbourne football team?
A: Cinderella wanted to get to the ball.


An Aussie said, “Take away your snow capped mountains, culture, and good food, and what would New Zealand be?”
The kiwi answered, “Australia”.

What do you call an Aussie with 100 girlfriends?
A farmer.


You know you’re in Australia when you’re surprised the train arrives on time.


Why is Australia such a dry country?
We don’t have a king or queen to reign on it.


Two Aussies are drinking together. One says, “When I die, will you promise to pour a beer on my grave?” The other replies, “No worries mate, but I’ll have to pass it through my kidneys first.”


Why did Tasmanians evolve to grow two heads?
So they can have an intelligent conversation when they visit the mainland.


If someone wants to visit a good spot within 2 hours of Melbourne, tell them to go to St Kilda via Punt Road.


Want to hear a joke about the construction industry in Australia?
Too bad, they’re still working on it.


You know you’re a hipster bogan when your coffee machine costs more than your washing machine.


Your taxi driver was a surgeon before arriving in Australia.


Two politicians go out to lunch together. In the middle of lunch one of them jumps up and says, "Bugger. I forgot to lock the office safe before we left."

The other politician replies "No worries. We're both here."

Sold out
Sold out

What’s the difference between Helen Keller and a bogan?
She got famous for not being able to read.


What’s the last thing a bogan says before they pass away?
“Hey mate - check this out!!”


What are the only two seasons a bogan can name?
Football and cricket.

You’ve ever cut the grass and found a car.


You think the stock market has a fence around it.


Your boat hasn’t left the driveway in 5 years.


You read the classifieds while holding a highlighter.


There are more than 7 McDonalds wrappers in your car.


You’ve taken out a loan to pay for your tattoo.


You know every driver racing at Bathurst.


You think the French Riviera is one of them fancy foreign cars.


Holden vs Ford is equivalent to good vs evil to you.


Your hero is Jack Daniels.


Fifth grade was your senior year.


You’ve been too drunk to go fishing.


P.S. Btw, if you just discovered that you, or someone you know is a bogan… you’re going to love these bogan gifts.

Sold out
Sold out